(For Letters of Recommendation, see further below)

As a child growing up in Southern California, I devoured books—Nancy Drew, the Hardy Boys, the Oz books, Lassie books, and a zillion novels, plus was an avid movie-goer. I made my first attempt at writing when I was twelve, but did not begin any serious writing until in my thirties, and then it became my passion. In my early years as a Mormon I sold articles to the Improvement Era, the official LDS Church's magazine, excerpts of which were used in their radio commercials on the family.

Regarding family, I married my husband (now deceased) in the Salt Lake City Mormon Temple. After seven years he died. I remarried and that husband died. Later, I became engaged and he died. (I quit trying after that.) I had three children with my first husband, a daughter and two sons, one of whom was later killed in a hang-gliding accident. My daughter Debra lives in Texas, loves to sing, and is the worship leader at her church. My son, Blake, also loves the Lord, is retired, and lives in Utah.

In 1978 I secretly joined a Mormon Fundamentalist group while still retaining my membership in the mainline church. You can read my story of how the group held me prisoner for nine months in a small room after they discovered me sneaking away to a Christian church. On the dashboard of my home page click on "Escape From the Cult - My Personal Story."

Conditions were such that I nearly died, but God spoke to me and enabled my escape. I was, however, left with serious health problems. I had a severe hemorrhage requiring six blood transfusions, then surgery. I had crippling back spasms that required the use of a neck brace; had a completely paralyzed colon and was facing a colostomy (but was healed in a Christian meeting); all in all, I was a physical mess. Today, thanks to the Lord, I am in excellent health. My only problem? I am gluten and lactose intolerant which is no big deal.

After I escaped I requested my excommunication from the LDS Church in 1980 and entered Christianity. I knew I made the right decision and that Mormon doctrines were unbiblical; nevertheless I still went through twelve years of traumatic aftereffects trying to undo my mental baggage. The reason it took so long is that I didn't realize there were Christian ministries that could have helped me through the transition. I went to Bible College, then on to the University to earn an M.A. in Theology.

In 1994, I sold my first book, Out of the Cults and Into the Church: Understanding and encourage ex-cultists, to Kregel Publications. This came about because during the time I was going through the emotional aftereffects of leaving Mormonism there were no Christian books describing why I was having such repercussions. After finishing at the University, I decided someone needed to write such a book. So, I did. In 1995, Kregel published my second book, The Mormon Missionaries: An inside look at their real message and methods, and also published a Spanish version, Misioneros Mormones.

In 2011, I decided to self-publish instead of going the traditional route. This, because agents were too hard to come by, and even if my book was picked up by a publisher it would be two years down the line before it would get into the stores. Therefore, in January 2012, I self-published the Second Edition of The Mormon Missionaries, updating statistics through 2010, and including an extra chapter on the LDS Church's new manual, Preach My Gospel that Mormon missionaries now use.

I also self-published my first novel, Ultimate Justice, a suspense thriller which was inspired by a true event of which I played a part.

Throughout my years of writing, my secular employment was working as Administrative Secretary to corporate officers; then, the last twenty years as Legal Assistant to an attorney. I retired in 2008.

Do I have any other interests? In years past I enjoyed oil painting and won many blue ribbons. I also played the piano and organ for funerals and weddings in the community. I have done none of these for some years now, as I prefer to spend my time writing. 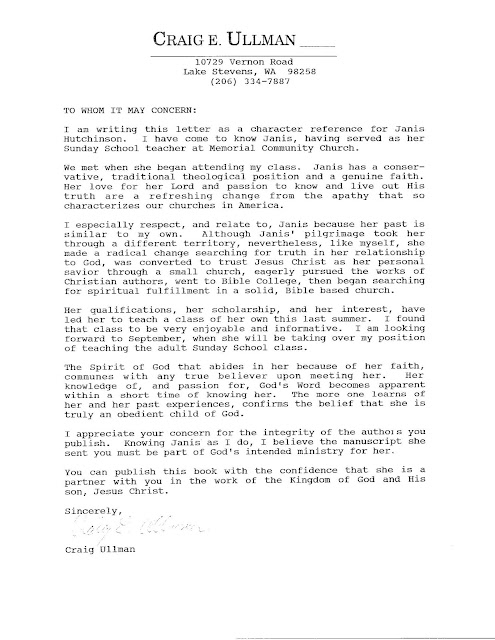 The following letter is dated 1993; however, I have known Pastor Gail O'Neil for over 20 years since then, and he would be available for an update. (Sorry the printing is so pale.) 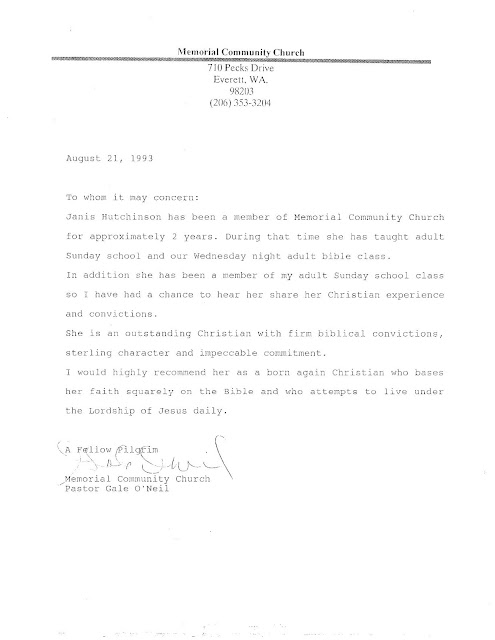 I've enjoyed reading some of your blog postings this afternoon. I'm not sure how I stumbled into your site, possibly through Linked-In, but I'm glad I did!

May God bless you and those who read your work!

Blessings on your day,
Sarah Keith

Thank you, Sarah, for writing me. I hope God's Love Surprise blessed you. If you are interested in being on my mailing list to receive announcements every time I post a new article on my blog (every 2 weeks), please let me know by emailing me at janishutchinson@frontier.com.

Interesting work Janis - thanks for sharing.

All Comments
WOULD YOU LIKE TO BE NOTIFIED EACH TIME A NEW ARTICLE IS POSTED? LET ME KNOW AT:
janishutchinson@comcast.net.
(Put "Mailing List" in subject line. No text in body required.) 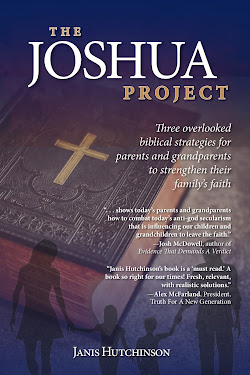 A NEW WAY for Christian parents and grandparents to impact their children and grandchildren's faith! Click cover to read opening pages free!